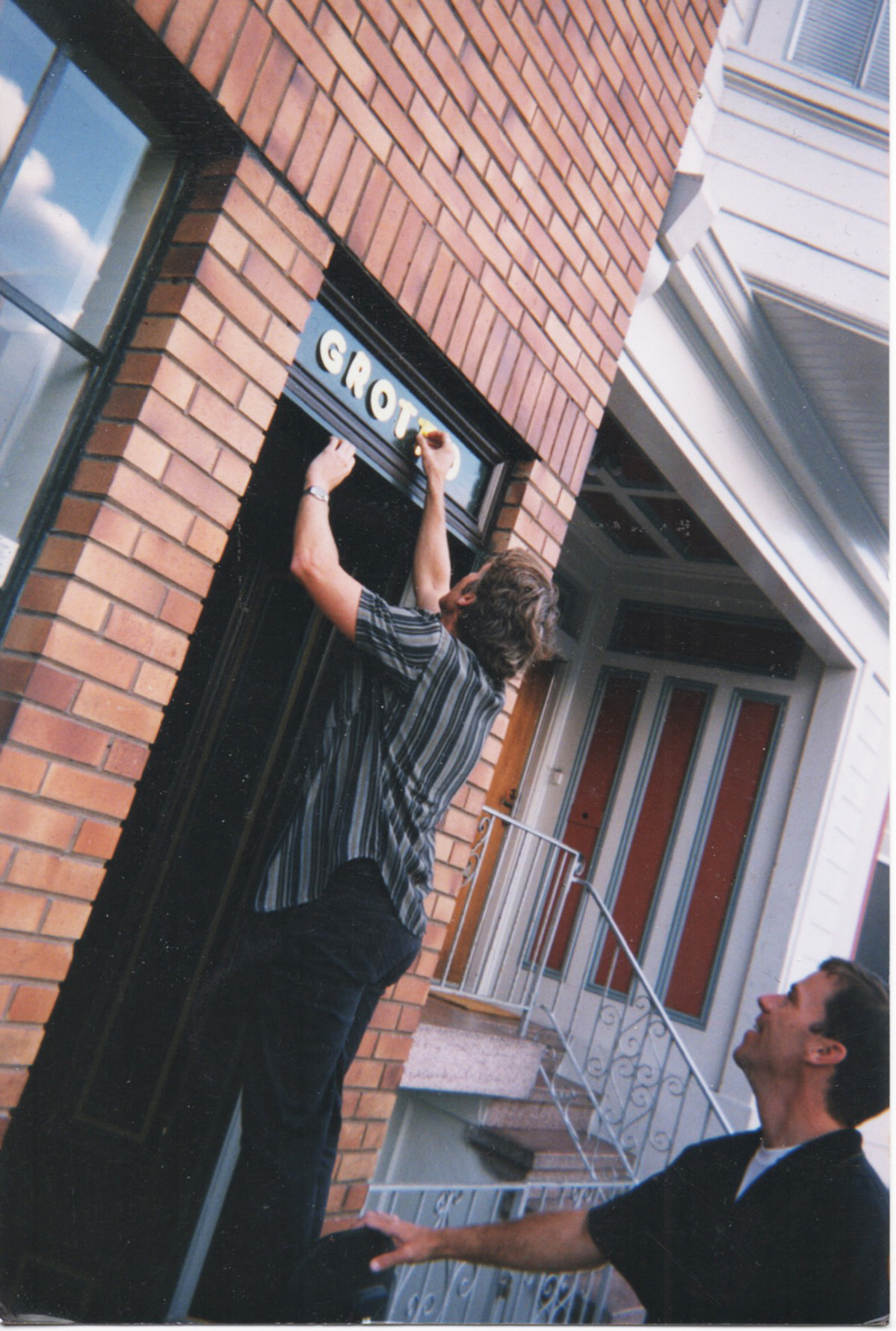 Po Bronson (left) and Ethan Watters hanging the Grotto sign at one of our former offices.
We began in 1994, when writers Po Bronson, Ethan Canin and Ethan Watters rented a six-room flat in a rundown Victorian on San Francisco’s upper Market Street, to use exclusively as a workspace.

Po Bronson (left) and Ethan Watters hanging the Grotto sign at one of our former offices.
“The rent was intimidating,” Po recalls, “and we were on the hook for the whole nugget if we couldn’t find some creative types to occupy the other three rooms.” They recruited filmmaker David Munro, monologist Josh Kornbluth and freelance writer Tessa Souter, dubbing the space the Grotto in homage to the writing room Po had previously maintained in his basement (a “grotto” being a small cave).

In 1996 we moved to a larger space in the South of Market district, growing our membership to nine in the process. As in subsequent relocations, getting larger wasn’t a goal in itself; it was a survival technique. As rents spiraled higher during the (first) dot-com boom, we found that splitting larger spaces between more colleagues provided us with an economy of scale. 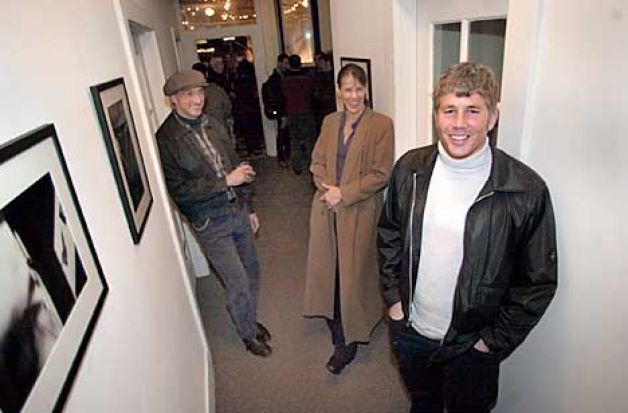 A Grotto event, 2002. (l to r: Todd Oppenheimer, Caroline Paul, Po Bronson).
In 1999, at the height of the boom, we were evicted. “There wasn’t anything left in the city to rent,” Po recalls, “but we didn’t want to abandon the heart of the city.” The group took over the former San Francisco Dog & Cat Hospital, scheduled to be demolished in two years to make way for a condominium tower. It was affordable only because doom was imminent: “To make it pay, we were going to have to put twenty-two writers and filmmakers in there, build the office walls and doors ourselves, put in skylights, rewire the electrical system — knowing with every hammer fall and screw turn that it would all be coming down in just two years.” Fortunately those two years stretched out into five, as the cooling dot-com economy delayed the demolition of the “Dog & Cat”. When we did move in 2005, it was into quarters larger still: an entire floor of an office building at Second and Bryant streets, near South Park.

We’ve since grown to fit that space. In 2008, we began offering classes and workshops to the general public. In 2011 we expanded our membership, by adding flexible common-area workspaces to our existing array of private offices. In 2012 we celebrated our thriving community by collectively tackling the task of writing a book within a single day: the result was 642 Things to Write About (Chronicle Books). It sold well enough to prompt a sequel, 712 More Things to Write About, in 2014.

Today, the Grotto has a roster of more than 120 authors, journalists, fiction writers, filmmakers, poets and other “narrative artists,” as we now describe ourselves. Our original hypothesis–that community nurtures productivity–has proven abundantly true. As we prepare to enter our third decade, the steady stream of books, articles, feature films, television series, short stories, poems and essays born here shows no signs of letting up.